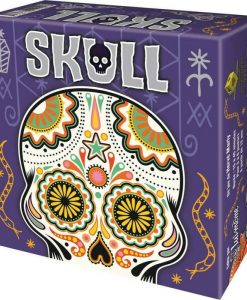 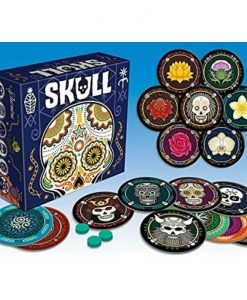 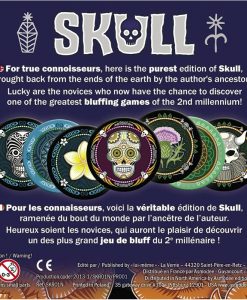 An ancient game of ornate skulls and dangerous roses. Skull is simple to learn, but dangerously difficult to win. Bluff, lie, and pierce through the deceptions to expose the roses. But be wary. If you happen across a skull, the consequences are dire.

Skull is the quintessence of bluffing. Each player plays a face-down card, then, in turn, everyone adds another card. And again. This continues until someone is brave enough to claim that they can turn a number of cards face up and get only roses. Other players can then overbid them, saying they can turn even more cards face up. The highest bidder must then turn that number of cards face up, starting with their own. If they show only roses, they win; if they reveal a skull, they lose, placing one of their cards out of play. Two successful challenges win the game. Skull is not a game of luck; it’s a game of poker face and meeting eyes.