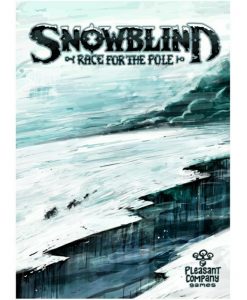 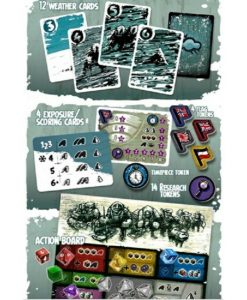 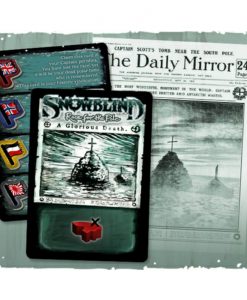 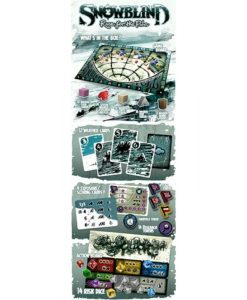 Snowblind Race for the Pole – English

Snowblind: Race for the Pole

Snowblind is a press-your-luck and risk-management dice game in which 1-4 players take control of a polar expedition, racing to be the first to return from the South Pole.

The object of the game is to collect the most prestige points. The further you advance your Captain, and the more men who survive the Antarctic winter at the end of the game, the more prestige your expedition receives. This requires careful management of crates, food and camps: without supplies, your explorers will not survive.

Play proceeds over a series of rounds. Within each round, players may make as many moves as they like, from those available, with each additional move becoming increasingly dangerous. In more detail, each turn, players may take an action (which involves taking a risk die from the action board, adding the die to their dice pool, then taking a corresponding action), or they choose to pass. Actions include moving explorers and crates, hunting for food, collecting research, and building camps. After completing an action, the active player rolls all the dice in their dice pool. High numbers result in exposure, the loss of supplies (crates and food), explorers being incapacitated, and even death. Exposure results can be offset by explorers remaining together (company) and the building of camps.

A round ends when all players have passed. At the end of the round, a weather card is drawn that may cause additional attrition, then the next round begins. When the pack ice card is drawn from the weather deck, one last round is played and the game ends.