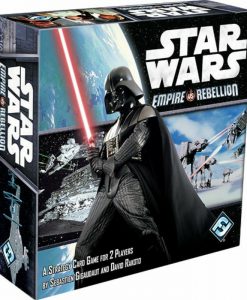 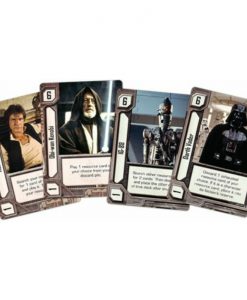 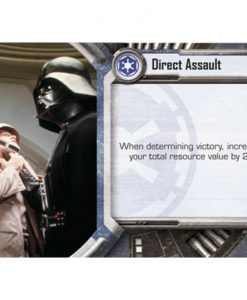 Claim victory in the Galactic Civil War in Star Wars: Empire vs. Rebellion, a fast-paced card game for two players. In every game, you and your opponent match wits and resources over key events. If you can thwart your opponent, you claim the event, bringing you closer to victory. Whether you seek to triumph through military might, or use diplomacy to achieve your ends, the fate of the galaxy rests in your hands.

On one side of this galactic battleground are the heroes of the Rebel Alliance. Only rarely can these heroes go toe to toe with the unlimited reserves of the Imperial Navy and Army. Instead, the iconic characters of Star Wars and the unsung heroes of the Rebellion must work in secret, utilizing diplomacy, reconnaissance, and the Force to achieve their aims. Even when the Rebellion deploys its full military strength to win a battle or destroy a key Imperial emplacement, they need the groundwork put in place by Alliance Special Forces.

Opposing the heroic endeavors of the Rebel Alliance is the massive power of the Empire, led by the twisted Emperor. The dark side of the Force is strong with the Emperor and Darth Vader, and the military might of the Empire is unparalleled across the galaxy. Whether you undertake aggressive negotiations or hire bounty hunters and scum to ferret out Rebel spies, making the Empire the ultimate power in the galaxy rests in your hands.

To successfully win these struggles and reclaim the galaxy in Star Wars: Empire vs. Rebellion, you will need to utilize all of your resources. Every turn, you can increase your factionâ€™s presence at the current event by drawing the top card from your deck and putting it into play. Each resource card you play give you more power and brings you closer to the objective value of the current event. As an example, the resource card shown to the right has a resource value of five, which it contributes to your total resource value while in play. Playing more resource cards may bring you closer to your target, but it also makes your efforts more obvious. If your total resource value ever passes the eventâ€™s objective value, your forces are discovered and your opponent claims the event.

Instead of playing a new resource card, you can also trigger the power of a resource card currently in play, exercising the might of the Empire or the cunning of the Rebel Alliance. To activate a resource cardâ€™s power, you must exhaust it by rotating it 90 degrees clockwise. Once a card is exhausted, you can’t use its power unless it becomes ready again. In addition, an exhausted card contributes its exhausted resource value, shown in the lower left-hand corner of the card while the resource is ready.

Be the first to review “Star Wars Empire vs. Rebellion Board Game” Cancel reply 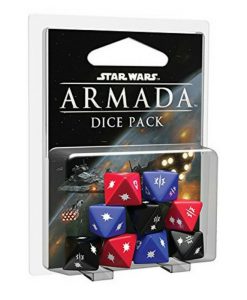