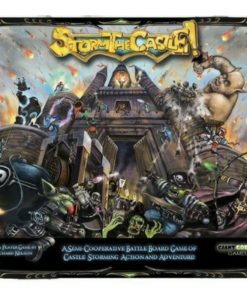 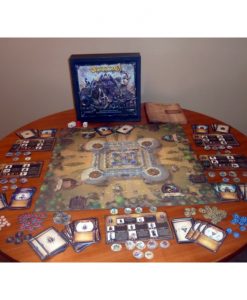 Welcome to world of Storm the Castle!, a 1-4 player semi-cooperative game in which you take the exciting role of one of the four marauding Dark Forces armies in a race to breach Castle StormHaven`s walls, overrun the defenders, and claim victory by reaching the castle`s keep first.Breaching Castle StormHaven`s thick walls is no easy feat. It takes a desire for loot, hordes of your minions willing to be led to certain death (err, victory), cunning strategy, and a touch of treachery. The first player whose Dark Force unit enters the keep, by the end of turn eight, is truly the mightiest champion and claims total victory for his army.The Story So Far – The Invasion Begins!Castle StormHaven is guarded vigilantly by brave defenders comprised of an alliance between Men, Elves, Halflings, and Dwarves. For over 300 years, these defenders have repelled numerous invasions from the Badlands, home to the subterranean Dark Elf marauders and the mysterious sect of arcane bending wizards, the Arcanists. StormHaven is the first and last line of defense from keeping the fertile farmlands and gold mines of Western Holmenstein from being overrun.Years ago, a mysterious masked and exceptionally short villain appeared with the goal of uniting the Badlands and ruling over Holmenstein. Dubbed “the Boss” by his cohorts, he promised gold and power to those who would follow him. First the Dark Elves, then the Arcanists joined his Dark Forces. Soon after, the Orc pirate raiders joined the growing army and brought with them their crazed goblin allies and monstrous cousins, the giants. Knowing The Boss` army needed further strength to overwhelm Castle StormHaven`s defenses, he revealed the last piece of strategy for domination, the Undead Horde of the BlackSoot Swamps.Now the four dark force armies Dark Elves, Arcanists, Orc and Goblins of the Green Tide, and the innumerable Undead host begin their long march east.Dark Force Army OverviewChoosin

Be the first to review “Storm the Castle!” Cancel reply