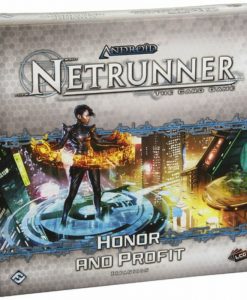 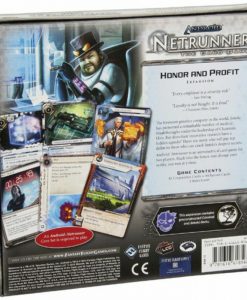 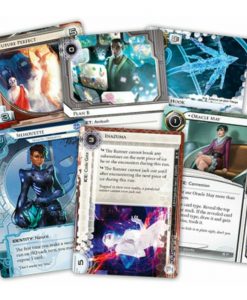 “Money is honest. Credits may be cold, uncaring, heartless abstractions, but they offer an unavoidable truth: The more, the better.” â€“Iain Stirling

The network lies before you; which path will you take? Focusing primarily on the interests of Jinteki and three new Criminal runners, Honor and Profit is a deluxe expansion for Android: Netrunner – The Card Game. Its 165 new cards (three copies each of fifty-five different cards) feature a dizzying array of new tricks and traps, events to alter the tempo of the game, new psi talents, and six new identity cards that engender the exploration of all-new deck-building strategies. Additionally, fans of every faction will discover plenty to love among the expansion’s neutral ambushes, ice, ops, AI, and connections.

The second deluxe expansion for Android: Netrunner The Card Game
Roughly two-thirds of its 165 cards focus on the Criminal and Jinteki factions
Six new identity cards permit the creation of highly focused new strategies
Introduces a wide array of tricks and traps useable by every faction
Age 14+